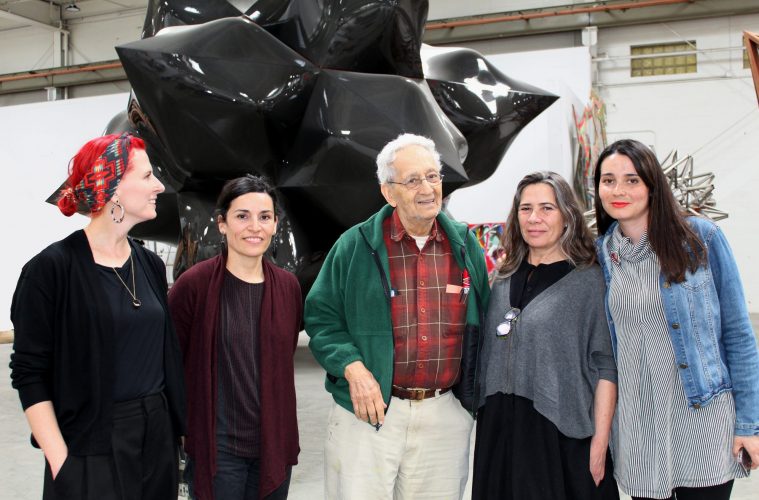 In October 2019, the MSSA team led by its Museum Director, visited Frank Stella in his studio in New York. At 84 years old and in full activity, the artist knew of the project for a new strainer for his artwork at first hand, remembered his first contact with the museum and provided relevant information for its subsequent restoration.

The memories of his first contact with Chile and information about the creative process of his works were part of the topics of the interview that three professionals from the MSSA carried out with the prominent American artist, concerning the project that seeks to restore and preserve the Isfahan III work of the MSSA Collection.

At noon on Tuesday, October 8th 2019, the Director of the MSSA, Claudia Zaldívar, along with Caroll Yasky, Coordinator of the Collection Area; Camila Rodríguez, MSSA Conservator; and Christine Fröhner, Conservation Specialist in modern and contemporary art and advisor to the project, interviewed American artist Frank Stella in one of the New York warehouses that the 84-year-old artist uses as a studio and where he continues to produce works of various formats with the help of assistants.

A moment for history

The conversation took place in two stages. The first part was dedicated to remembering the period in which the artist was contacted by American art critic Dore Ashton to donate work in solidarity with the utopian project of the Unidad Popular in 1972. The artist was told about the vicissitudes of his work after the coup d’état and the problems caused by the loss of its original stretcher. Stella also shared his memories regarding the sending of architectural and sculptural projects for the MSSA in the early 90s and his reunion with the museum and Isfahan III in 2000, when he participated in the opening of an exhibition at its venue in Herrera Street.

In the second part of the interview, the artist was presented with the conservation project that was being developed for his work, its goals and ongoing progress, detailing the characteristics of its new strainer, its design and construction process, as well as the application of the new elastic tension system for mounting its canvas.

Stella was asked for details of his creative process to design the works for the Protractor series, how and with whom he worked on the construction of the stretchers, their layout and painting, the materials and techniques used. This gathered information will prove to be very useful for subsequent projects seeking the restoration of its pictorial layer.

The meeting between this legendary artist and the representatives of the MSSA, a fundamental milestone of the project, was entirely filmed by Kathy Brew -documentalist and guest curator of the MoMA- as commissioned by film director Bruno Salas.