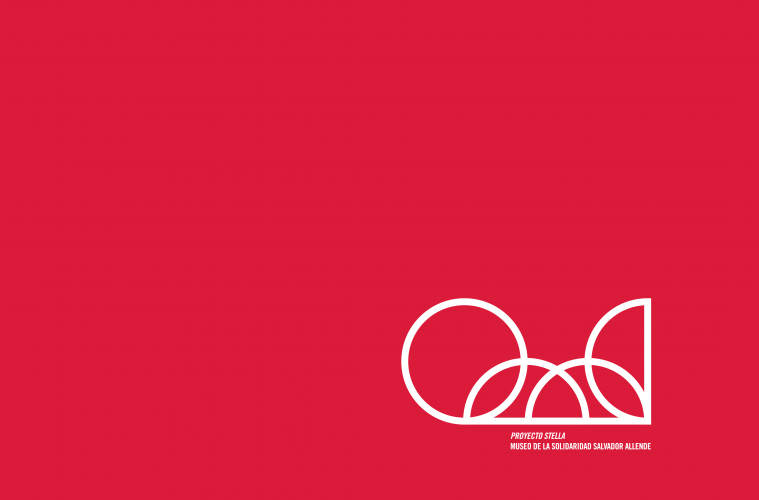 Museo de la Solidaridad Salvador Allende is currently developing an innovative restoration project for the work Isfahan III by American artist Frank Stella, which equiped it with a new stretcher using elastic tension technology. This was done through a collaborative working model that incorporated professionals from different countries and specialties. This artwork is one of the ten most relevant pieces of this museum -founded in 1972 in Chile- which due to the vicissitudes of Chilean history, spent nearly twenty years devoid of its structural support and without being exhibited.

In this minisite you will learn about the latest news of MSSA’s Stella Project, which represents the first time that the Conserving Canvas initiative, from the Getty Foundation, supports a Latin American institution.

Considered one of the ten most iconic works in the MSSA collection, Isfahan III by American artist Frank Stella (1936) was created in 1968 and donated to the museum in 1972, thanks to the efforts of art critic Dore Ashton from New York, motivated by Mário Pedrosa, Brazilian critic and founder of Museo de la Solidaridad. The work landed in Chile, and was exhibited to large audiences, at a time when Stella had already achieved notoriety and the MoMA had already held his first retrospective.

Due to the relevance of this irregular and large-format work (304 x 610 cm), the loss of its original stretcher after the 1973 coup d’état, and the structural and aesthetic deficiency of the last supporting version, in 2019, Museo de la Solidaridad Salvador Allende started implementing this project with the support of the Getty Foundation through its Conserving Canvas initiative. Stella Project has thus sought to design and work collaboratively, together with national and foreign specialists, on the structural restoration of Isfahan III, while incorporating instances for professional development, knowledge and good practices exchange.

Structured in three stages, the project has included the participation of experts from Italy and the United States in both practical and theoretical workshops. In these sessions, the museum’s conservation team –consisting of Camila Rodríguez (Chief conservator) and Elisa Díaz (Second conservator)- shared knowledge with twenty-six conservators and technicians in wood and stretchers, specialized in modern and contemporary paintings from institutions in Santiago, Concepción, Valparaíso, Buenos Aires and Rosario (Argentina), Bogotá (Colombia) and Sao Paulo (Brazil), who were invited to participate in weekly sessions during the months of August and September 2019, at the MSSA.

“It is the first time that the Getty Foundation, through Conserving Canvas, funds a project belonging to a Latin American institution. For us, this has been very significant because it has allowed us to research and work on one of our iconic artworks from different perspectives and with innovative conservation practices. It has also been a propitious moment to expand and create collaboration networks with professionals and institutions which work on the best interest to professionalize museum activity, thus impacting other institutions”, says Claudia Zaldívar, Director of the MSSA.

Antoine Wilmering, senior program officer of the Getty Foundation adds: “When Frank Stella painted Isfahan III, little did he know that 50 years later, conservators would explore and apply his own geometric principles and painting techniques to preserve the work. Getty is proud to have been a part of this first Conserving Canvas project in South America, through which MSSA has also promoted the adoption of new structural canvas conservation techniques. Conservators from across the region have learned to devise a tailor-made stretcher for the painting using a minimal spring-loaded tension system, and gained valuable historical and practical knowledge that they can pass on to their peers.”

Between August and December 2019 the first two stages of the program were carried out, including two workshops for professionals in this field and delivering the structural restoration of Isfahan III. The latter consisted in designing and building a new strainer for the work, cleaning and preparing the canvas on its back side and the application of an innovative elastic tension system to mount it to the new strainer.

In August 2019, Antonio Iaccarino, Italian conservator specialist in painting and structures, held a workshop on stretchers which allowed Chilean and Southamerican participants to discuss and exchange proposals for the design and construction of the new strainer for Isfahan III in Chile. One of the main contributions of this week-long workshop was to introduce and explain to participants how the innovative elastic tension system works to mount canvas to its stretchers. During the workshop this system was applied to a painting from the MSSA Collection by Italian Corrado Cagli, and a mock-up of the central part of Isfahan III to test its performance.

During September 2019, the second workshop was aimed at the analysis of the pictorial layer of the work and a discussion regarding future treatments of pictorial cleaning and reintegration. That week of daily sessions was in charge of two specialists in Stella’s work, Christine Fröhner, associate conservator of Contemporary Conservation Ltd, New York, studio in charge of the artist’s works; and Kamila Korbela, conservator of LA Art Labs, who works as an associate researcher at the Los Angeles County Museum of Art (LACMA) in the United States. Both, together with Iaccarino and the Stella Project team, delved together with the participants in a discussion regarding the pictorial layer of Isfahan III, while taking into account the history of events suffered by this work and the formal characteristics of the series to which it belongs. The workshop also included practical exercises in cleaning techniques, material analysis and reintegration which could be applied to this work.

Parallel to the workshop week held in September, the construction of the new frame for Isfahan III was completed. It was co-designed by Iaccarino, the inhouse team of professionals, wood specialist artist Patrick Steeger, and architect Daniel Ortiz, founder of ProFábrica workshop in Santiago, where it was manufactured using the latest technology.

“The design of the strainer for this artwork involved a process of collective interdisciplinary work and valuable discussions due to its complexity, both in conceptual and technical terms. We have investigated the artwork and the series to which it belongs in order to have clarity regarding its formal characteristics and original materials which required to be preserved. The design, materials and technology used for the strainer construction and tensioning of the canvas are innovative and safeguard both the material and symbolic conservation of the work. This has been a challenge in itself, considering that Chile has scarce suppliers of conservation products and lacks specialized workshops for the construction of complex stretchers such as Isfahan III” says Caroll Yasky, Coordinator of the MSSA Collection and Head of the Stella Project.

Caroll Yasky values the co-creative and interdisciplinary collaboration approach developed at this stage, that «has been essential to carry out this project, as well as the commitment of each of the professionals involved».

– Learn more about the challenge the structural restoration in this link.

Frank Stella received the director of MSSA and representatives of the Stella Project in his NY workshop last October 2019. Imagen: Archivo MSSA.

An appointment with the author

In October 2019, an MSSA entourage –consisting of Camila Rodríguez, Caroll Yasky and Museum Director Claudia Zaldívar- traveled to New York where, together with the project’s conservation consultant, Christine Fröhner, interviewed Frank Stella in order to recover his testimony on the donation of Isfahan III to the Museo de la Solidaridad and learn more about the original production process and materiality of the artwork to establish conservation and intervention criteria for the work.

An 84-year-old Stella expressed his gratitude for the special treatment the MSSA has given to his painting and provided valuable specific and technical information for the Isfahan III conservation process.

– More about the interview to Frank Stella here

The third stage of the Stella Project contemplates the cleaning of the pictorial layer of the work. This will be carried out by a group of painting conservation specialists who participated in last year’s workshops and inhouse MSSA conservators, who will lead the process. In addition, a transit frame will be designed and built, that is, a structural packaging which will serve to manipulate the work, move it and store it in its deposit, protecting the new strainer and the elastic tension system applied to hold the canvas.

The end of the project will be marked by a public seminar at the MSSA, on a date yet to be defined. Antonio Iaccarino and other relevant professionals of the Stella Project will participate, in order to share different perspectives on the processes, treatments and discussions that took place within the framework of this project. The seminar will come to a close with the premiere of the Stella Project documentary directed by Bruno Salas and an open conversation with the project team.

During Iaccarino’s stay, a formative closing session will be held regathering the professionals who participated in the previous workshops and processes, in order to review and evaluate the performance of Isfahan III since its restoration, completed in December 2019 when displacement sensors were installed in it.