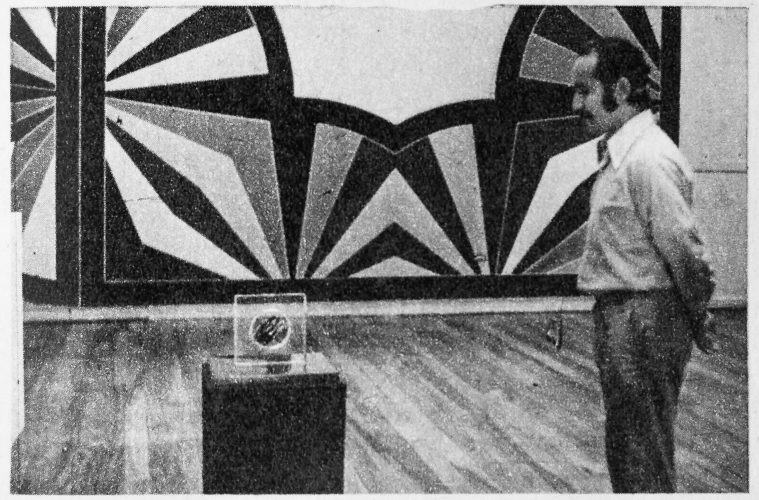 The history of the artwork which Stella donated to Chile

This article, written by Natalia Keller, MSSA’s Registrar, accounts for the place held by Isfahan III within Frank Stella’s artistic career, its donation to the MSSA in 1972, and the eventful history it outlived after the coup in Chile.

Frank Stella (United States, 1936) is one of the most legendary and influential living visual artists in the development of contemporary art. His successful artistic career began in the late 1950s with his famous series of black paintings. The originality and simplicity of these canvasses completely covered with rhythmic compositions of black stripes opened him the doors to the most important galleries and museums in the United States, such as the MoMA in New York, among others.

A decade later, in 1968, Stella painted Isfahan III which is part of the Protractor series, a group of irregularly shaped canvases made between 1967 and 1970. The series, which was planned as a total of 93 pieces, was devised to include 31 canvas formats based on the multiplied shape of a protractor, each painted in three variants of compositions named “interlaces”, «rainbow” and “fans”. The titles of the works in this series refer to cities and places in the Middle East. The title of the work belonging to the MSSA collection corresponds to the Iranian city of Isfahan and the third pictorial variant: fans.

The work arrived in Santiago in 1972 -its canvas rolled up and separated from the stretcher- along with other donations from American artists, made possible by joint efforts of American art critic Dore Ashton and Chilean Ambassador to the United States, Orlando Letelier. The piece was exhibited for the first time in Chile the following year, in the second exhibition of the Museum de la Solidaridad held at the MAC [Museo de Arte Contemporáneo] of Quinta Normal, that functioned in the old Parthenon. After the coup and during the dictatorship, the work was transferred and kept without its frame in the MAC building in Parque Forestal, folded and forgotten.

The canvas without the stretcher in the National Museum of Fine Arts before its exhibition in 1991. Imagen: Archivo MSSA. © [1968] Frank Stella / Artists Rights Society (ARS), New York

In 1991, after the restitution of democracy in Chile, and during the process of recovering the pieces donated to the Museo de la Solidaridad, the great canvas by Frank Stella was found. Isfahan III was presented again to the public at the MSSA reopening exhibition in Chile, held at the Museo Nacional de Bellas Artes where it was displayed highlighted in the main hall. Since then the work has been exhibited numerous times, on several occasions as part of the permanent exhibition of the MSSA collection, both at its previous venue on Herrera Street and in its current one at the República neighborhood.

As the only piece of the Protractor series found in a Latin American museum, Isfahan III has also been requested for international exhibitions, for this reason it traveled to Brazil in 2007 and Italy in 2008.

The current intervention and conservation treatment, carried out within the framework of the Stella Project, constitute a relevant milestone in the life of this important work by Frank Stella. Thanks to the work carried out by the multidisciplinary team of the project, Isfahan III -with its new strainer- will be able to be preserved in optimal conservation conditions so that future generations learn more about Stella’s artistic production and the history of this work in Chile.