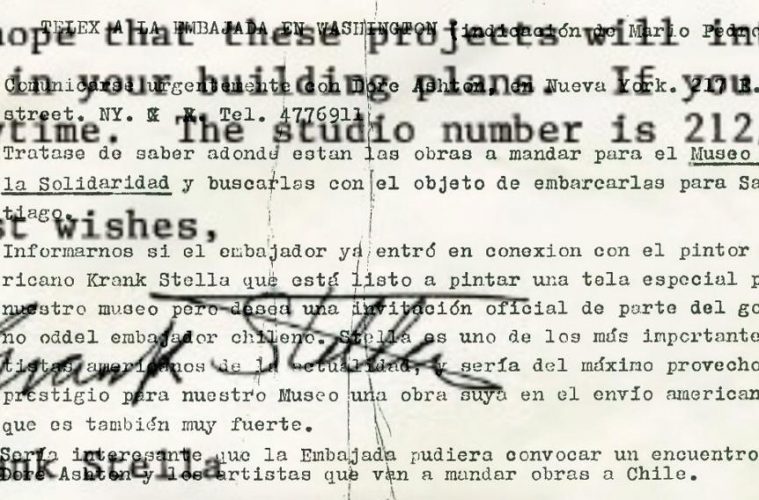 Traces of an artwork’s history

The Museo de la Solidaridad Salvador Allende shares the documents that tells Isfahan III story, a large and unusual painting that the American artist Frank Stella donated in 1972 and which today belongs as heritage to all Chileans. Like several of the works in the Collection, the epic that marks its trip to Chile and the history of its recovery after the coup d’état persists to the present day, where due to the allocation of international funds the museum has been able to restore it structurally.

The MSSA Archive not only keeps the museum’s valuable history of its three periods, but also the creation of its Collection, which safeguards works donated since the early 1970s, when communications and transportation were managed through telephone calls, letters and telegrams. These documents, many of them aged by the years, stand witness to that past tracing the efforts, adventures and anxieties of curators and artists to ensure that these valuable pieces arrived intact in Chile, regardless of their formats or the corner of the world whence they traveled.

The archive pieces presented here offer an open window to the history of one of the most important works in the MSSA Collection, Isfahan III (1968) by the renowned American painter, engraver and sculptor, Frank Stella (1936). An enormous 3 x 6 meter painting on canvas which arrived in Chile in 1972 thanks to the efforts led by art critic Dore Ashton from New York, with the support and constant coordination from Chile of Mário Pedrosa, Brazilian critic and one of the main founders of the Museo de la Solidaridad.

After the coup d’état, in 1974, the painting -along with the rest of the works of the Museo de la Solidaridad that were kept in the Museo de Arte Contemporáneo (MAC) of the Universidad de Chile- was transferred from its venue in the Parthenon of Quinta Normal to its current venue in Parque Forestal. It is presumed that it was then disassembled from its original strainer and in the aftermath of history it was lost.

Reminiscent of Moorish buildings -its name in fact refers to an Iranian city- the singular round-shaped work was kept in the MAC depots folded back on itself until it was exhibited again to the public in 1991 when the MSSA was reinstated in Chile and held its first inaugural exhibition at the Museo Nacional de Bellas Artes. Since then, three previous stretchers have been accounted as applied to the work, which although allowed its public exhibition, were deficient in conservation terms and have caused deformations onto the canvas. One of the documents which closes the history that this artwork has lived to date, tells its author that it will finally have a conservation strainer, created with specialized technology and designed in conjunction with international conservation specialists.

Telegram sent to the Chilean Embassy in Washington at the indication of Mário Pedrosa, 1972.

Pedrosa instructs the urgent sending of a message to Dore Ashton, asking for confirmation of certain operations such as having contacted Frank Stella as it is known that he is preparing an artwork for the museum.

Telegram from the Chilean Embassy in Washington to Mário Pedrosa dated October 12, 1972.

With a list of works sent to the museum, including that of Frank Stella.

She is seeking to reestablish contact with Mário Pedrosa after the coup d’état in Chile, of whom she has had no news. While she fears about the fate of the works she helped send to the museum, she comments that she receives pressure from lawyers of artists who made donations, including Frank Stella’s.

Letter from Frank Stella to the Chilean cultural agent and gallery owner Carmen Waugh, director of the MSSA, January 6, 1993.

It expresses the joy of knowing that she was able to find Isfahan III and that it will be restored. He also tells her that he is creating new works and projects that he would like to propose to the MSSA.

She appreciates having met him personally in New York and that he is offering these proposals to the MSSA, but explains that the poor financial situation of the latter prevents her from accepting these intentions.

The artist is informed that after obtaining funds from the Getty Foundation, a new stretcher for Isfahan III can be built with the support of international conservation specialists. It refers to the Stella Project.